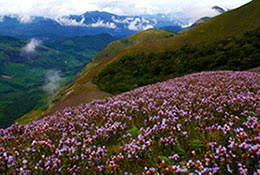 Munnar is a destination sprawling of tea and cardamom estates, interspersed with luxuriant forests. Tropical plantations of tea, coffee and cardamom, dense forests & wildlife sanctuaries all teeming with flora and fauna, portray the rich bio-diversity of the region. Of particular interest among the wildlife that abound in Munnar are the Nilgiri Tahrs (Mountain Goats), Langurs and Elephants. Munnar is also famous for the exotic flower – ‘Neelakurinji’, which blooms every 12 years and covers the mountains of Munnar with a glorious carpet of purple.

Munnar was once the summer capital of the British administration in South India. In summer entire families and their staff moved to Munnar. Due to the cool climate they named Munnar 'little England'. Even though documented historical information exists from the 10th century, prehistoric relics found in the area indicate the existence of a Stone Age civilization. In the early 19th century the chieftain of the villages in the Anchanad area named Kannan Thevar held lands to the north of the high ranges in the territory under the rule of the Raja of Poonjar. JD Munro a British lawyer and tea planter leased close to 600sq km of jungle around Munnar from the Poonjar king. It is believed that the first tea sapling was planted by A.H.Sharp in what is today part of Sevenmullay Estate. He then cleared the forests for tea plantations. This land was then known as Kannan Thevar Concession Land till 1895 when Finlay Muir and Company bought Munro's land. Today many remanents of the colonial period can still be seen in Munnar town and in the surrounding tea plantations.

Be it the innumerable waterfalls, amazing sightseeing locations like the Sita Devi Lake in nearby Devikulam or the spectacular views from the Gap Road, the Muthuvan Tribal community nearby or the ideal Trekking and Camping locations, this area of Munnar has become a popular tourist hideaway.

Fort Munnar has begun a new initiative in developing a spice garden along with our Jungle Park. By planting a variety of spice and fruit trees, our guests will have the experience of a Spice Garden at their doorstep – avoiding the need for additional travel...

One of the older running Tea factories where you are given a Guided Tour of the art of Tea processing by the traditional method. Set in a scenic background, this building lends an old world charm with its wooden interiors and aroma of tea. You can also buy fresh jams, pickles and Tea from their sales outlet.

Sprawling tea gardens surrounded by evergreen forests on the slopes of high mountain ranges make the Anayirankal Lake and Dam a very popular picnic spot. Herds of elephants often visit the lake to quench their thirst.

Anayirangal is an old watering hole for elephants. The area around the Anayirangal Dam has been developed and the boating started here is a new venture of the department of Hydel Tourism. This Dam has a number of islands and boating here is a unique experience. Not only do you frequently see elephants at the water’s edge, but very often your boat will have to give way to a herd of elephants swimming across from one island to another.

Munnar is home to a number of elephant herds. The boating at Anayirangal Lake and Dam provides a great opportunity to watch them swimming in the lake and making their routine crossings across it to islands dotted across the lake. Elephants also come down to the water’s edge to quench their thirst and if you are lucky you will also see their young ones frolicking around. This is a must watch for animal lovers!! Take the shutters off & get the cameras ready !

The Kolukkumalai Hills are home to the highest Tea Plantations in the world. The tea grown here has a special flavour and freshness due to the high altitude. A Jeep Safari to the Tea Factory here is an experience well worth it. Spectacular views of mist shrouded mountains and the far off plains of Tamil Nadu ! Stroll through the pathways on the plantations and for the more adventurous, trek down a bit along the steep and narrow bridle path leading to the plains – this was the only option in the olden days to take down tea chests to the plains and bring up provisions.

For those who want to experience the traditional art forms of Kerala, there is a performing arts centre nearby, with very reasonable entrance fees and easily accessible from Fort Munnar.

There is a lovely waterfalls, which emanates from the legendary 'Sita Devi Kulam' near Devikulam, believed to have been the bathing place of 'Sita' wife of 'Rama' of Ramayana.

The panoramic view of Bison valley and other sleepy little villages thousands of feet below, wrapped in mist most of the time.

Thekkady and the Periyar Wildlife Sanctuary is only 80 kms from Chinnakanal. In fact, the main and easy route to Thekkady from Munnar Town is via this area.

The Indo-Swiss project, taking care of over 100 varieties of high yielding cattle is one of the largest of such ventures in India.

On the way to top station from Munnar is a small lake set amidst rolling hills where there is echo point.

The Sethuparvathy Dam constructed in 1946 as a part of Pallivasal Hydro Electric Project is a ravishing sight. Pedal boats and kashmiri shikaras are made available to the tourists to make the memories of their visit everlasting.

The sight of Tamilnadu state spread before you on the east and the distant sight of the Arabian sea on the west will remain etched in your memory once you stand at this point which is the highest on the Munnar - Kodaikanal road.

The Nilgiri tahr, a very rare type of mountain goat (Hemitragas bylocres) , on the verge of extinction. Half the world population of this rare goat is seen in and around Rajamala.

A placid lake land-locked by the misty mountains, grass lands with fascinating tiny flowers, and some rare near-extinct animals are the star attractions on this world renowned national park. Anamudi, the highest peak in South India (2695 Meters) is a part of the park.